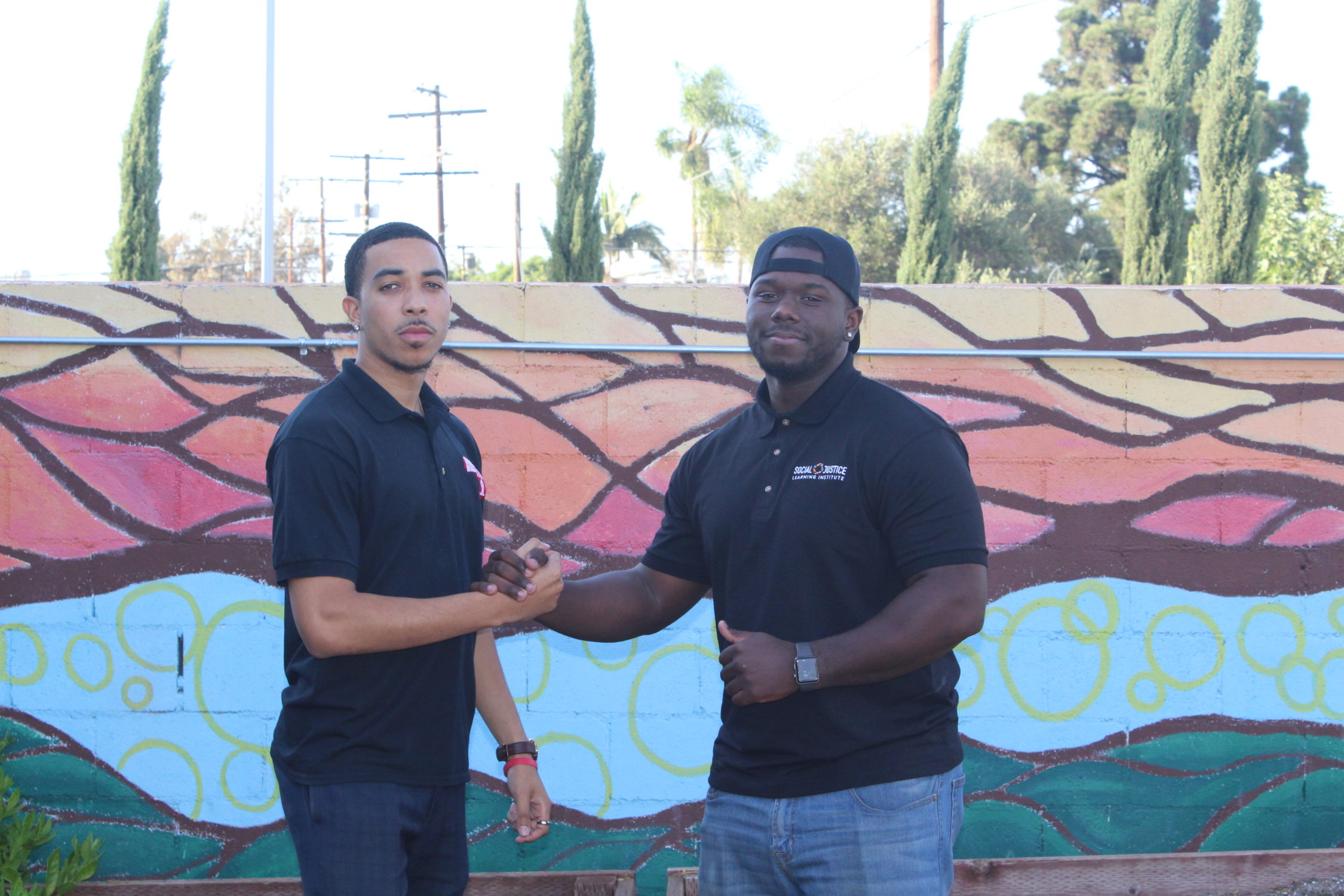 Tykeem (TK) Brown and Dylan Gray have come full circle from starting as Morningside High School students in the Black Male Youth Academy to joining SJLI as two of our newest Educational Equity team members who are now supporting the next generation of students. The Black Male Youth Academy, otherwise known as Urban Scholars, is an educational program designed to empower youth to enable the change they want to see in the world.

TK was part of the first Black Male Youth Academy/Urban Scholars cohort in 2008  and will now be teaching the Urban Scholars curriculum as a Program and Curriculum Coach. He participated in Urban Scholars all four years of high school. TK credits Urban Scholar’s staff for inspiring him and his peers and he looks forward to the opportunity to do the same.  He describes the process of transforming an un-kept empty lot into a community garden as the marker of his cohort believing in themselves. “It (the garden) went from being an idea, to on paper… We went in there, dug up gravel, got it fixed up, and next thing you knew we had a garden!.. Youth had power we didn’t know we had.”

Dylan also participated in the Urban Scholars program all four years of high school at Morningside. He will be supporting students as an Academic and Career Counselor. Dylan credits his involvement in the Black Male Youth Academy for developing his interests and budding skills as a community activist.

After graduating Morningside High School, TK and Dylan stayed connected to SJLI through the Urban Scholar’s alumni network, activities and annual retreats. Many of the alumni, including TK, expressed their desire to formalize their role as alumni and increase their engagement with the alumni network.  In 2016, the Urban Leaders Council was created and officers elected. TK was a founding member and became the Council’s first president, which he served for three years. The Urban Leaders Council was founded to provide support for SJLI’s alumni network, identify activities and plans for ways that alumni could engage more deeply with SJLI and the community.

Similarly, Dylan became a strong advocate and voice for change on his college campus at Chico State. Dylan served in student government as Commissioner for Diversity his sophomore year and was elected student body President his senior year. While serving as student body president, he championed resources for students of color, co-drafting a resolution in support of Black and African American recruitment and retention across California State Universities.

In 2019, as part of the Urban Scholars expansion to several new school districts; SJLI needed to add to its Educational Equity team.  Both Dylan and TK applied and interviewed successfully and joined SJLI as staff members. Starting the Spring 2020 semester, TK and Dylan will return to where the program began over 10 years ago in Inglewood. TK and Dylan will be the Ed Equity team members managing the program and supporting students at Morningside High School.  Dylan shares his excitement, “I want to let our students know that there is much more opportunity out there. I look forward to helping them achieve their educational goals.” TK also expresses his eagerness to be in the classroom, “I want to help give back, to take time away from everyday life problems and teach them and be that person they can count on.”